Free ground shipping on all orders $50 or more

The Toucan Wireless Video Doorbell has been rated "The best affordable wire-free video doorbell" by PC Magazine's Editor's Choice in 2022, with an Excellent (4/5) score.

Read the following from Realtor Magazine by John R. Delaney

If you're in the market for a smart doorbell but don’t want to deal with wiring and voltage transformers, the Toucan Wireless Video Doorbell is an excellent deal. It runs on a rechargeable battery, installs in minutes, and comes with a wireless remote chime that you can place anywhere in your home or yard. Additionally, the camera delivers sharp 1080p video, works with Amazon Alexa and Google Assistant voice commands, and offers free cloud storage for video recordings. It doesn’t support the Apple HomeKit or IFTTT platforms, but the Toucan is still a strong value that earns our Editors' Choice award for affordable wireless video doorbells.

The doorbell operates completely without wires and relies on a 6,500mAh rechargeable battery for power that Toucan says should last up to four months between charges. Included in the package, you get a weather-resistant wireless chime box that matches the design of the doorbell. The chime runs on two AA batteries, measures 2.5 by 2.5 by 0.6 inches (HWD), and can play one of six sounds. The package includes the two AA batteries for the chime box, as well as a mounting plate, a small screwdriver, mounting screws and adhesive, a USB charging cable, and a setup sheet.

The front of the doorbell houses the camera, a PIR (passive infrared) motion sensor, a speaker, a light sensor, a microphone, and a doorbell button with an LED ring. The LED ring glows solid blue when the sensor detects motion or when someone presses the doorbell button, and flashes red when the doorbell loses its connection to the network. Around the back are a Set button and a micro USB port for charging. The enclosure also features a 2.4GHz Wi-Fi radio and a siren.

The camera captures 1080p video and has a 180-degree field of view. It uses four tiny infrared LEDs for black-and-white night vision and has a 1:1 aspect ratio, which provides a wide vertical and horizontal viewing angle. The camera begins to record when someone presses the doorbell button or when the device detects motion; in either scenario, the doorbell stores the video in the cloud.

The doorbell pairs with the Toucan mobile app (available for Android and iOS) and you access its features via a dedicated panel on the Dashboard screen. Tap the panel to view a live stream. Buttons below the feed let you enable two-way talk, begin a manual video recording, take a snapshot, mute the speaker, and view the video in landscape mode. You also get a button to quickly dial out to 911 (or to any other number you add to the Emergency list), as well as one that plays one of seven prerecorded messages (including the sound of a barking dog). 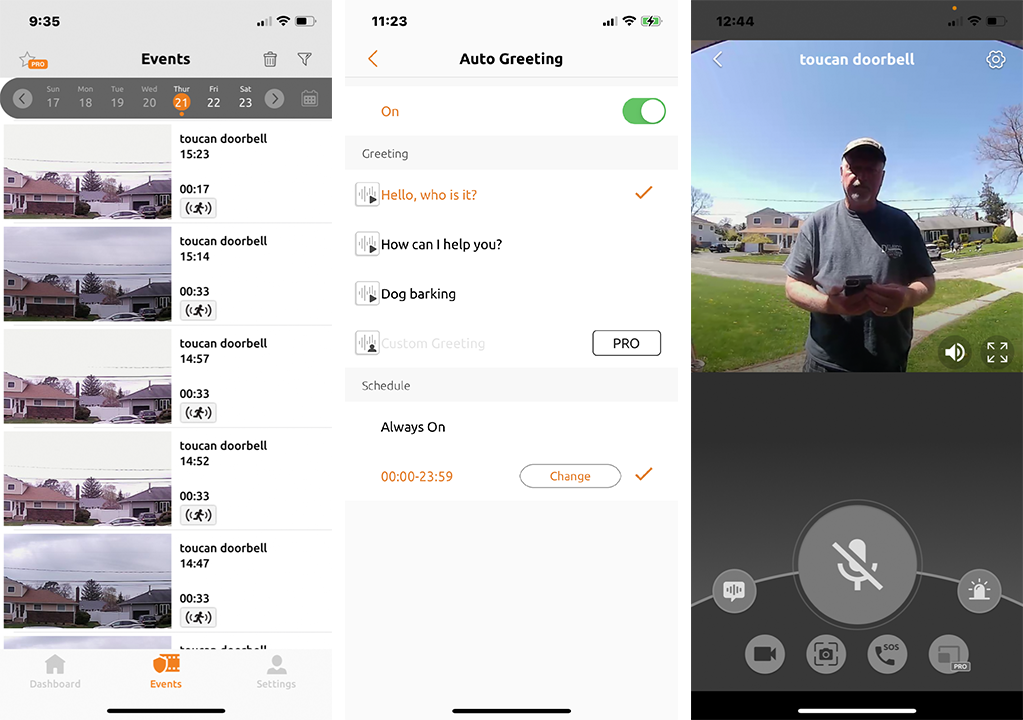 Installing the Toucan doorbell is simple because you don't need to deal with any wires. I downloaded the app, created an account, and authenticated the verification email. Then, I tapped Add a New Device on the Dashboard screen, selected Wireless Video Doorbell, and gave it a name. Next, I selected my Wi-Fi SSID, entered my Wi-Fi password, and pressed the Set button on the doorbell until the LED began to flash blue and a voice prompt announced that the device was initializing. I tapped Next, and the doorbell paired with the app in about 10 seconds. After this, I installed the AA batteries in the chime box and tested the component by pressing the doorbell button. To complete the installation, I attached the doorbell to the front door frame of my house with the mounting plate and screws, placed the chime box in my backyard, and updated the firmware. The entire process took less than 10 minutes.

Read the rest of the article on PC Magazine